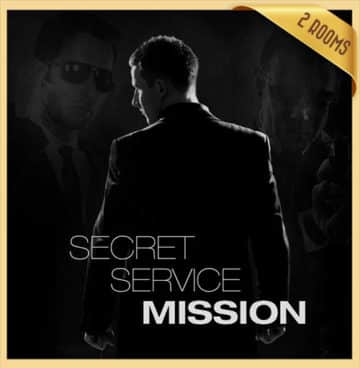 How Much?: $36-$42 p.p depending on group size (at the time of writing, Escape Hunt Sydney had a buy-one-get-one-free deal running in The Entertainment Book, which we utilised).

How Many?: Billed as suitable for 2-5 people (I’d suggest 2 is enough)

Kid Friendly?: Nothing scary, but there’s not a great deal for kids to do in the room (unless they’re hamsters).

How we did: Completed April 2018. Team of 2 including 1 first-timer. Escaped with over 20 minutes remaining.

Required: 2 members of the team with full mobility and appropriate footwear. Watch your head. You have been warned!

Your mission as Australian Secret Service Agents is to investigate the disappearance of the Prime Minister, Harold Holt. You’ve got an hour to cross the city to meet your informant and get the intel, while evading the assassin!

I’ve read mixed reviews of Escape Hunt Sydney – they have fabulous reviews on Trip Advisor, yet more experienced escapers like Escape Rooms Sydney and Lock Me If You Can tend to rate their rooms as fairly run-of-the-mill. Still, I decided to go with an open mind and was interested to see what a worldwide franchise does that’s different from the smaller guys. For this, my fourth room in Sydney, I took along Meema, who’d never done an escape room before to see what she thought of the room (and the escape experience!) She was worried she was not going to be very good at it.

We went to Escape Hunt Sydney in the middle of a weekday, which meant we found the place blessedly quiet. It seemed pretty obvious to me that these guys are geared towards servicing the corporate market. The waiting room is well appointed and spacious, decked out with chesterfields, brick wallpaper, and old chests lining the walls. There’s even a large space where you can grab a Sherlock Holmes cape, hat and pipe, and take silly / serious selfies. These guys know how to market.

Even though the space is large, I can imagine it would fill up very quickly on weekends if there were 6 groups occupying the space, and with no partitions, it could get a little loud. As it was, we only saw one other couple during our visit, and otherwise had the place to ourselves.

We found Escape Hunt easily (across the road from Dymocks and a lift ride to the 4th floor) and were warmly and promptly greeted. We were shown to the chesterfields, but pretty much left to our own devices for a bit after that (literally – we were given an iPad to fill out the waiver, and rather than being explained by the games master the ‘rules’ are all on a sheet you need to read). Once we’d told the games master we were ready to go, we watched the obligatory video about our mission to find information regarding the disappearance of Prime Minster Harold Holt and avoid the assassins who were trying to kill us.

While the video was pretty slick, the mission itself didn’t really make that much sense – I really like the idea of interweaving history with an escape room, but the premise of this room left me with a lot of questions. Why do they have us looking for information about Harold Holt when his body was never found? Why are there assassins out to get us? And why did they have to change history to say Holt disappeared at Bondi, when he disappeared in Victoria? Am I in modern times, or 1967? It seemed like a strange jumble of unrelated things, especially when there are so many excellent rooms in Sydney that do a fabulous job of historical immersion.

So, now that we’ve got our slightly nonsensical mission down, let’s get into the room. We locked up our stuff in a chest, and were given our walkie-talkies (yes, Escape Hunt still utilises the old-school walkie-talkie system, although they do have cameras in the room so you don’t have to explain where you’re up to.)

The first room was nicely themed: the inside of one of those old silver trains – very nicely done and took me back to my early teens when I used to catch one that looked just like it to school every day. It was a fairly high-tech room with some physical and sequencing puzzles.

We got off to an okay start but got bogged down quite quickly with a puzzle I found frustrating (my pet hate is frustrating, time-wasting puzzles!). Not to give anything away, but it was a complex sequencing puzzle, followed by a timed puzzle. If you failed to do the timed puzzle in the allotted time, you had to completely redo the lengthy sequencing puzzle. This led to a fair bit of time wasting, as it took us three goes to complete (partially because of the technology). Having said that though, Meema said she didn’t find it as frustrating as I did. We ended up using the walkie-talkies three times in quick succession to escape that particular room!

That little hiccup out of the way, we headed to the next room, and the next. We fairly flew through the following puzzles that utilised mechanical, electronic and lock-and-key elements. There wasn’t a great deal of finesse to the placement of any of the other puzzles, they were all pretty much: ‘here is the puzzle – solve it’ with only the smallest amount of search-and-find and very little use of whole environment. We escaped the room with over 20 minutes on the clock.

I didn’t mind that the rooms were small. They were nicely decorated, and the ‘Harold Holt’ motif was scattered throughout them (although again, it wasn’t particularly thematic). What this room lacked, I felt, was clever puzzles. There simply weren’t enough to fill the time, and the end was, therefore, a little disappointing as there was no rush to beat the clock. A second set of puzzles running in tandem to the first (or perhaps collecting objects along the way) would really improve this room and give a better end experience especially as this room is billed for up to 5 players, and we sailed through it with 2. I asked the games master whether it is common for players to get stuck in the first room, and she said yes, most teams spend over 30 mins in that room, which definitely shows some very uneven flow to the game design.

As I said in the description, this room is billed as a great room for kids, but as it was very linear and the puzzles were fairly adult I’m not sure what kids would do in this room unless they’re hamsters (you know what I mean if you’ve been in this room). If you’ve got younger kids, take them to Paris Escape instead.

All in all, I found the experience enjoyable, but a bit lacklustre. Meema, who’s first room it was, enjoyed it a lot, (which probably accounts for the excellent Trip Advisor reviews – this is just the sort of room lots of first-timers would do) although she too commented on the weird history jumble. I can’t wait to take her to her next room and see how she compares the two!

Location / Outside the Room

For city-based organisations looking for walk-in team-building activities, you can’t beat the location of Escape Hunt Sydney situated on George St directly opposite Dymocks in the heart of the CBD. They have purposely mirrored 2 of their 4 rooms so that larger groups of up to 12 can split into two teams and go head-to-head, which is, of course, another draw for the corporates.

They have bathroom facilities and offer tea, coffee and water which was nice for debrief at the end of the game. The games master we had on the day was very competent and friendly.

Sydney Escape Hunt feels very geared towards the corporate or first-timer market. If you have a Groupon or a two-for-one, by all means, use it. Bring a newbie along and introduce them to escape rooms. Escape Hunt Sydney also offers the ‘escape challenge’, giving you a discount of up to 20% off full price when you come back to do more rooms. If you’re booking for a large corporate group and planning to come after a long lunch for a bit of team-building, rest assured they’ve built these rooms with you in mind. For experienced players though, I’d suggest perhaps spending your $$$ on one of the more impressive Sydney outfits.